Reflecting on 2020 US Science Progress

The survey sample was weighted by gender and academic field to represent the population as closely as possible. The measure of sampling error for questions answered by the full sample is plus or minus 5 percentage points.

We asked scientists to rate the amount of progress made by the U.S. on 22 science and technology topics over the past 12 months. 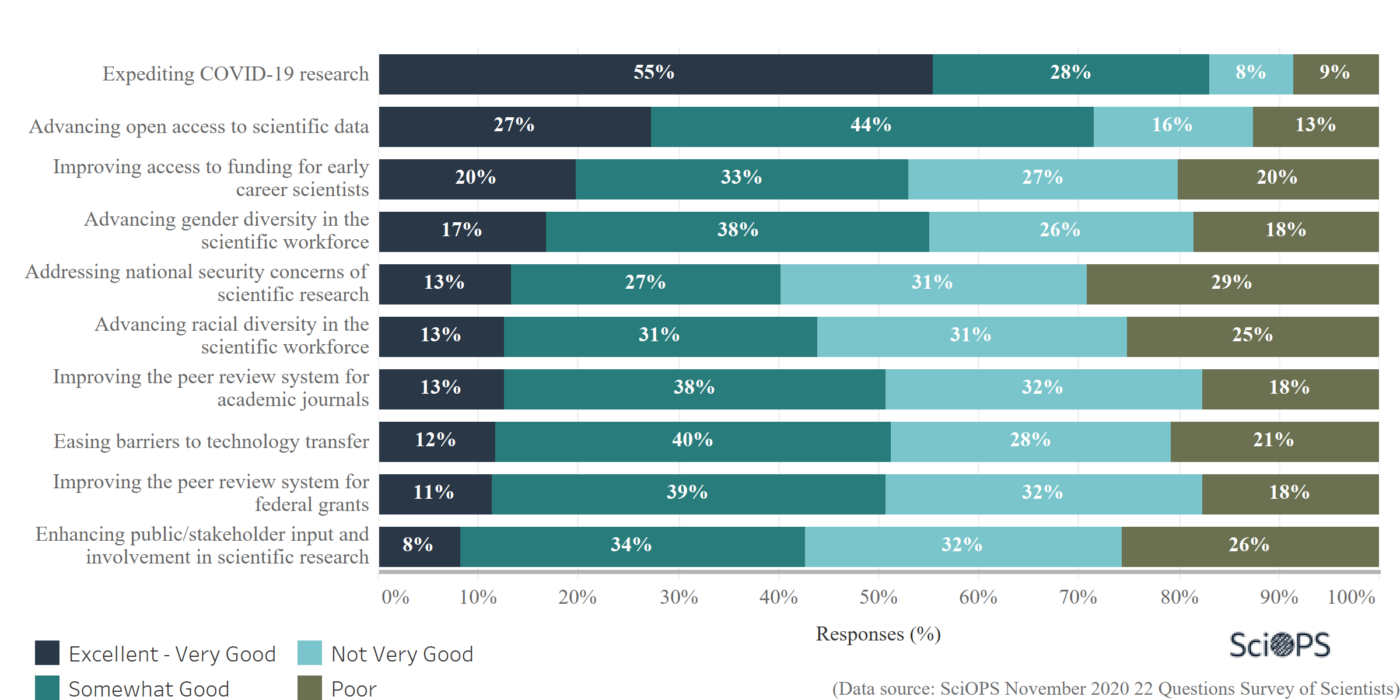 Top scientific practice areas characterized by the greatest progress over the last 12 months. 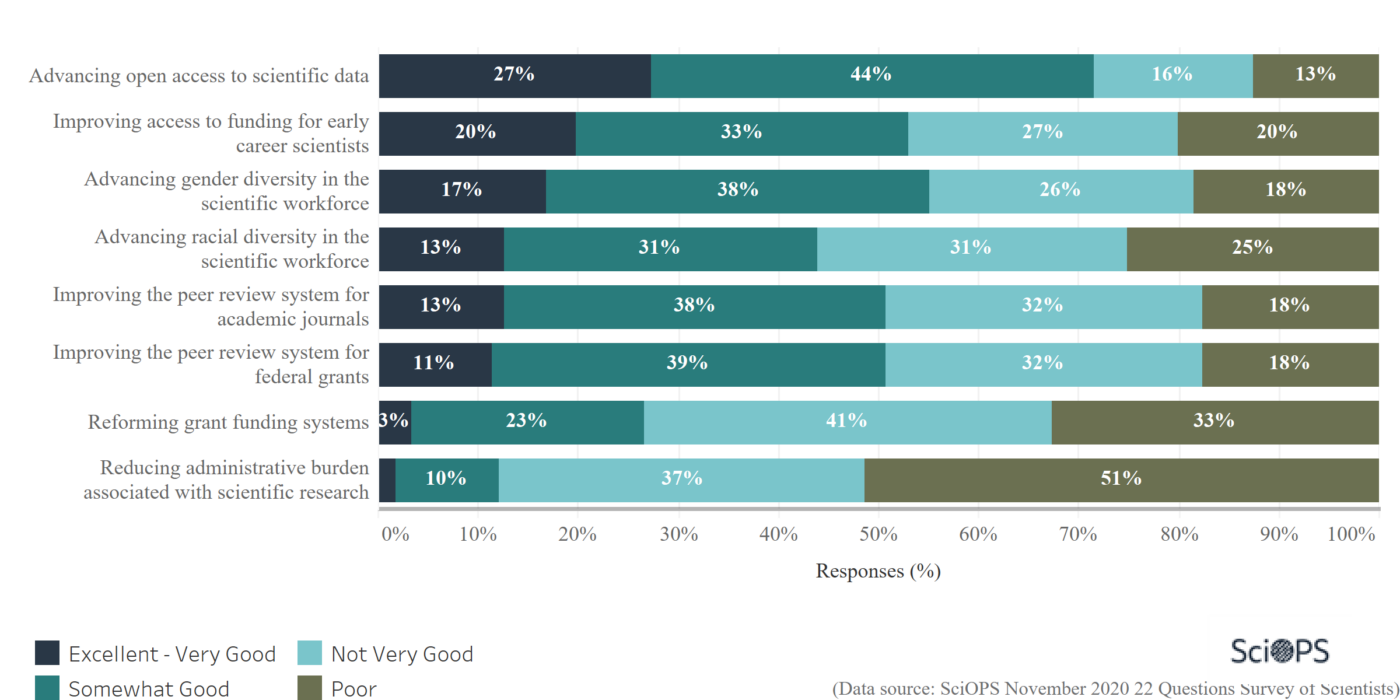 Most respondents (51%) believe that poor progress has been made to reduce the administrative burden associated with scientific research.

A third of the respondents (33%), reported poor progress has been made to the reform of the grant funding system.

Top science communication issues characterized by the greatest progress over the last 12 months. 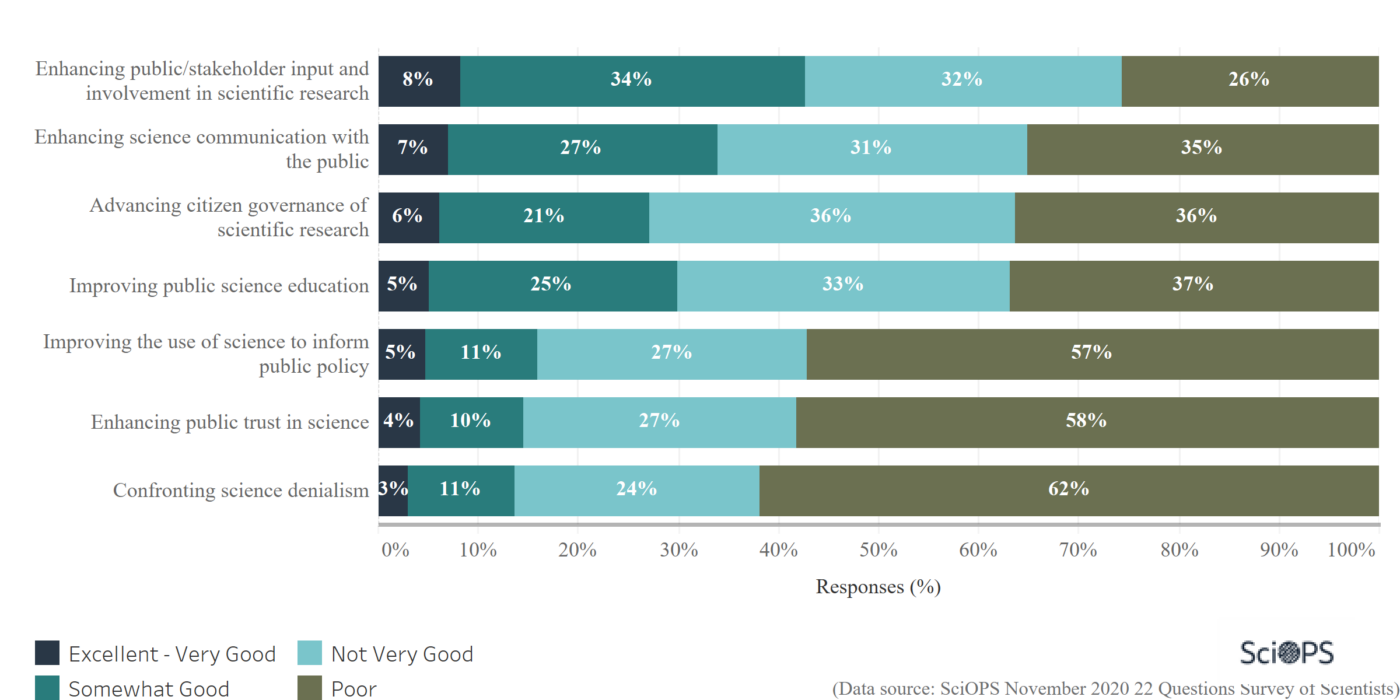 Most respondents agree that little progress has been made on science communication issues within the last 12 months.

Very few scientists (8%) reported that excellent or very good progress has been made to enhance public/stakeholder inputs and involvement in scientific research.

More than half of respondents feel that progress to address science denialism (62%) or enhance public trust in science (58%) has been poor.

Top science policy areas characterized by the greatest progress over the last 12 months. 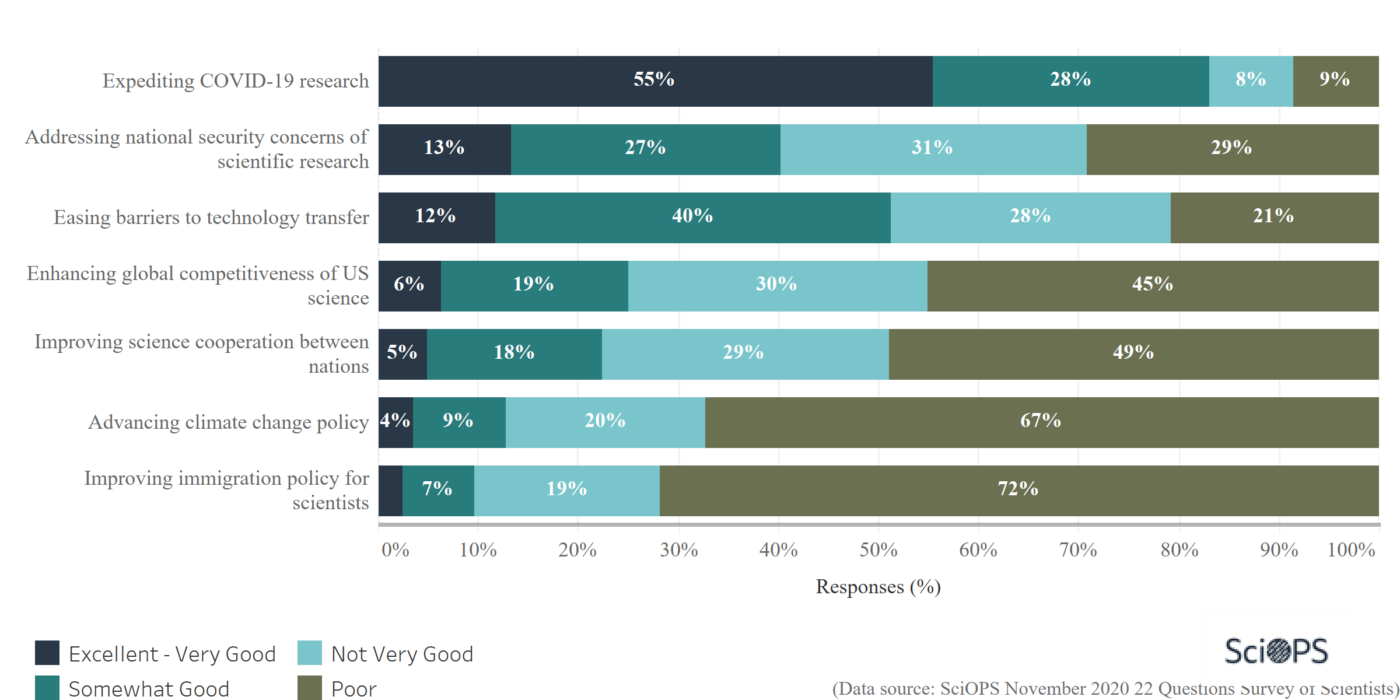 Over half (55%)of respondents believe that expediting COVID-19 research has been considered as the area in which the greatest progress has been made in 2020.

Conversely, almost three-quarters of scientists (72%) believe that in 2020, poor progress was made to improve the immigration policy for scientists.

Gap between the top ranked science priorities for 2021 and the progress made within those same areas in 2020. 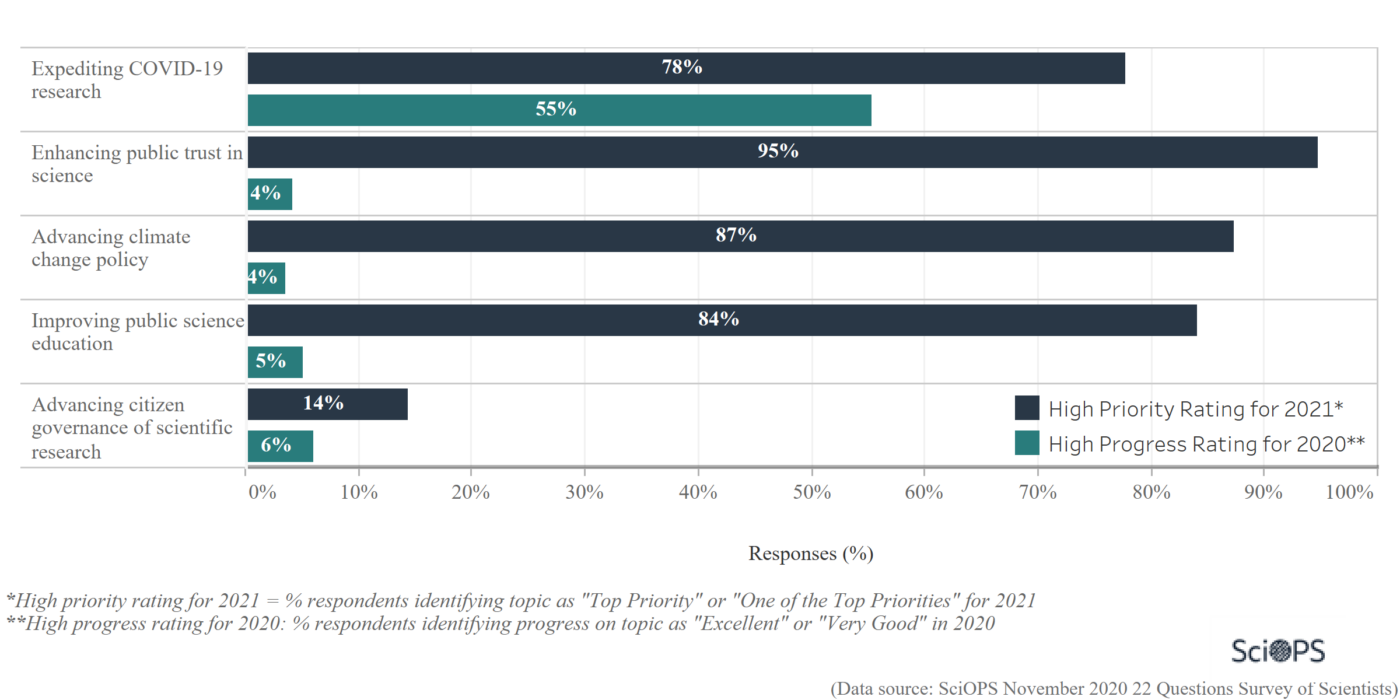 Respondents reported that expediting COVID-19 research was the area in which the greatest progress has been made, but also continues to be one of the top priorities for 2021.

95% of the scientists believe that enhancing public trust in science should be considered a top priority or one of the top priorities in 2021, even though only 4% of the respondents believed excellent or very good progress was made in this area over the last 12 months.

This national survey on science, technology and society 2020 events and priorities was conducted by the Center for Science, Technology and Environmental Policy Studies at Arizona State University. The population for the survey represents a random sample of academic scientists (tenured, tenure-track and non-tenure-track) who work in three departments three subfields (biology, civil and environmental engineering, and geography) at 60 randomly selected universities classified as Carnegie designated research extensive (R1) universities in the United States. The online survey was administered in English using Sawtooth Software®. A total of 2,436 individuals were invited to participate in the survey via email invitations with a series of personalized email follow-up reminders.  Survey invitations were sent on October 21, 22 and 23, followed by three reminder messages. The survey was closed on November 23rd.

A total of 451 usable responses were obtained, representing an AAPOR response rate (RR4) of 18.8%. The survey sample was weighted by gender and academic field. The measure of sampling error for questions answered by the full sample is plus or minus 5 percentage points. A total of 44 questions were included in the final survey questionnaire. The questionnaire included sections asking about (1) progress that has been made within the U.S. in addressing 22 science and technology topics over the past 12 months; and (2) science and technology topics which should be a priority for the U.S. in 2021. The survey was approved by Institutional Review Boards at Arizona State University and at the University of Illinois at Chicago.

Science and Media: Opportunities to Share Research with the Broader Public

Supporting Scientists' Engagement with the Media

Top US Science Priorities for 2021